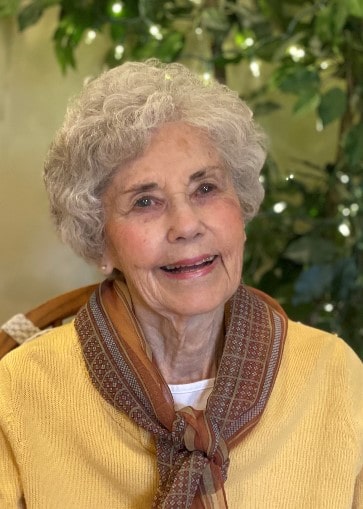 Wilma was born September 23, 1934, in Orange CA, the only child of Lytel D. and Vera (O’Rourke) Larsen. Wilma was raised in Santa Ana, CA where she began playing the accordion at age 5 and piano at age 8. She was an accomplished pianist all her life. Her love for drawing and painting began at an early age. Childhood summers were spent at the family beach house in Newport Beach, CA. She was surrounded by many aunts, uncles, and cousins from her parents’ large families. The family moved to Upland, CA in 1949 where Wilma graduated from Chaffey Union High School in 1952 and the University of Redlands, CA in 1956 with a business degree.

In 1964 on a blind date, Wilma was introduced to Leo Lutz, a fine young man from Emporia, KS. They were married in Long Beach, CA in 1964 and their two children, David and Laura, were born in Santa Rosa, CA.  Wilma and her family lived in six different cities in CA over the years, together exploring the western states, visiting family in Kansas, and spending time on the water – beach visits, cruising the California Delta waterways, water skiing, and fishing in the lakes of the Sierra Nevada mountains. Wilma’s greatest joy was the deep devotion and love her family has for each other and for our Lord Jesus Christ.

Leo and Wilma moved to Lawrence, KS in 1994 with their newly acquired travel trailer. They visited all 48 lower states documenting them with Wilma’s vibrant watercolor paintings and Leo’s beautiful black and white photographs. Wilma was a member of the New Generation Society, Downtown Tuesday Painters, and the Empty Nesters at Corpus Christi Catholic Church.

Wilma will be remembered as a devoted wife and mother, loyal friend who held lifelong friendships, welcoming and generous neighbor, and for her love of art, music, history, nature, and the fun times well-spent with family and friends.

Mass of Christian burial will be held at Corpus Christi Catholic Church in Lawrence, KS on Thursday, January 13, 2022, at 11:00 a.m. with visitation earlier at the church at 10:00 a.m.  Inurnment will be at a later date at St. Joseph’s Cemetery, Olpe, KS. Memorial contributions may be made in Wilma’s name through Warren-McElwain Mortuary and specified for Lawrence Memorial Hospital, Corpus Christi Catholic Church, or the charity of your choice and may be sent in care of Warren-McElwain Mortuary, 120 W. 13th Street, Lawrence, KS 66044.