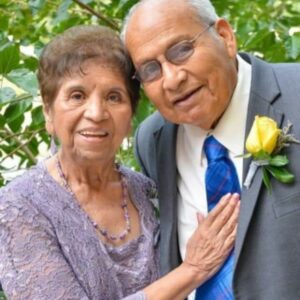 Thomas was born September 20, 1927 in Lawrence, KS, the son of Jesus and Mary (Servin) Ramirez.

Thomas served his country in the United States Air Force during WWII. He was a member of the American Legion Dorsey Liberty Post #14 and a member of Cursillo through St. John Catholic Church.

He worked as a custodian for the Lawrence School District and KU.

Thomas loved his Jayhawks and did not like the colors black or brown. The family is requesting attendees of his service dress in their favorite team colors, military attire, or bright colors.

He married Josephine M. Vega on October 1, 1949 in Topeka, KS. She survives of the home.

A Rosary will be recited at 7 p.m. Sunday, November 3rd with a visitation to follow until 8:30 p.m. at the church.

In lieu of flowers, memorial contributions may be made in his name to St. John School and may be sent in care of Warren-McElwain Mortuary, 120 W. 13th Street, Lawrence, KS 66044.