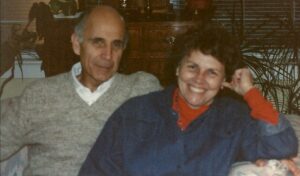 Memorial services for Jerry F. Rogers 94, Lawrence will be held at 2 p.m. on Wednesday, August 25, 2021 at Plymouth Congregational Church. This will be a celebration of life for both he and his wife, Elizabeth Jane Heywood who preceded him in death on December 17, 2020.

Jerry was born on August 21, 1926 in Topeka KS, the son of Dean Rogers and Hazel Klingaman-Rogers.

While at Washburn, Jerry met and began dating Elizabeth Jane Heywood. They were named homecoming King and Queen and made it permanent in 1952 by becoming husband and wife! They made their home in Lawrence with Jerry teaching and coaching at Lawrence High. Forever a proud Chesty Lion!

Jane was a homemaker and together they raised two children, Jennifer and Kyle. Jerry left LHS in 1967 to be the Director of Financial Aid at KU until his retirement in 1991. They both absolutely loved socializing with friends and were in many bridge clubs throughout their lives.

Jerry was an avid sports enthusiast. He had a 50 year stretch as a volunteer at the Kansas Relays and was on the “Chain Gang” for 49 years with KU Football. They had season tickets to KU basketball and attended every game for many years. They were both big KU fans but Jerry bled KU blue!

Through all of his endeavors it was always the connection to people that motivated him and he endeared himself to all who knew him.

He is survived by his daughter, Jennifer Ann Rogers and her wife, Lisa Aquilar, his son, Kyle Winton Rogers and (his most cherished) three grandchildren; William Rogers, Caelan Rogers, and Sophia Rogers.

The family would like to express our deep love, appreciation and thank you to the caregivers and staff at Meadowlark, Keep Living at Home, Interim Healthcare and Hospice and Bridge Haven Memory Care. Your love and care made mom and dad’s last year’s safe, happy and filled with love. You all are amazing people and you have our lifelong love and gratitude.

Memorial contributions may be made in Jerry’s name to Bridge Haven, Keep Living at Home or Interim Healthcare and Hospice and may be sent in care of Warren-McElwain Mortuary, 120 W. 13th Street, Lawrence, KS 66044.