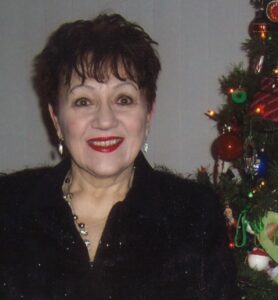 ** The Celebration of Ann’s life and Open House HAS BEEN POSTPONED. We will have updated information on rescheduling when it is possible to reschedule.**

Ann was born in Chicago, Illinois to Dr. Dominic Cereva and Nina (Wandrey) Cervera on October 23, 1942. She grew up and attended public schools in Chicago Heights, Illinois. While a senior in his school Ann got her start in acting and singing by having the leading role in the production of Brigadoon. She played Fiona. After high school, Ann attended the University of Illinois, ChampaignUrbana, earning a B.A. degree in Music Education.The following fall, she began her graduate work towards a master’s degree in Music Education. In her first graduate class, another first year graduate student sat down by her by the name of Jim LaPoint. He learned her name from the roster sheet and they began to work on research papers together. That was early September, they began dating. She took him home to meet her parents for Thanksgiving and Jim had her come to Quinnesec, Michigan for New Years. They were engaged on Valentine’s Day and were married on June 26, 1965 in Chicago Heights, Illinois. In the fall of 1965, they both got teaching jobs in the same school district in Bradley-Bourbonius, Illinois. Ann taught junior high music and Jim taught elementary school physical education. In the early summer of 1967, their first son (Michael) was born. Later that same year they moved to Marquette, Michigan, where Jim had received his B.S. degree in Physical Education to teach in the undergraduate P.E. program. While in Marquette, their second son (Mark) was born in 1968. In the summer of 1969, the family moved to Toledo, Ohio for Jim to began work on his Ph.D. in Physical Education. The third son (Matt) was born there in 1971. They were living on Jim’s assistantship salary but made things work out with three small children. Ann got her start in stage productions by singing with the Toledo, Ohio Opera Company. She performed in the Opera LaTraviata. Jim graduated with his doctoral degree in the summer of 1972 He was hired as an Assistant professor at the University of Minnesota in Minneapolis-St. Paul. While there, son number four (Mitchell) was born in 1976.In 1978, the family moved from the Twin Cities to this little know place of Lawrence, Kansas. The neighbors thought they were moving to the end of the world!! Jim took a faculty position of Associate Professor of Physical Education. With four small children, Ann stayed home to raise them. When they all were in school, she began a 30 year career as a substitute teacher. Students loved having her as a “sub” knowing she meant business with no excuses for misbehaving. She now had time for her real passion, doing acting, dancing, and singing in Community Theatre productions. Over the course of her time in Lawrence she was in over 30 productions. She attended many shows at the new Theatre Lawrence, but did not get to perform in any of them. Ann was a member of two different bridge groups. She was an avid reader and loved to do crossword puzzles.

Memorial contributions may be made in her name to Theatre Lawrence and may be send in care of Warren-McElwain Mortuary 120 W. 13th Street Lawrence, KS 66044.