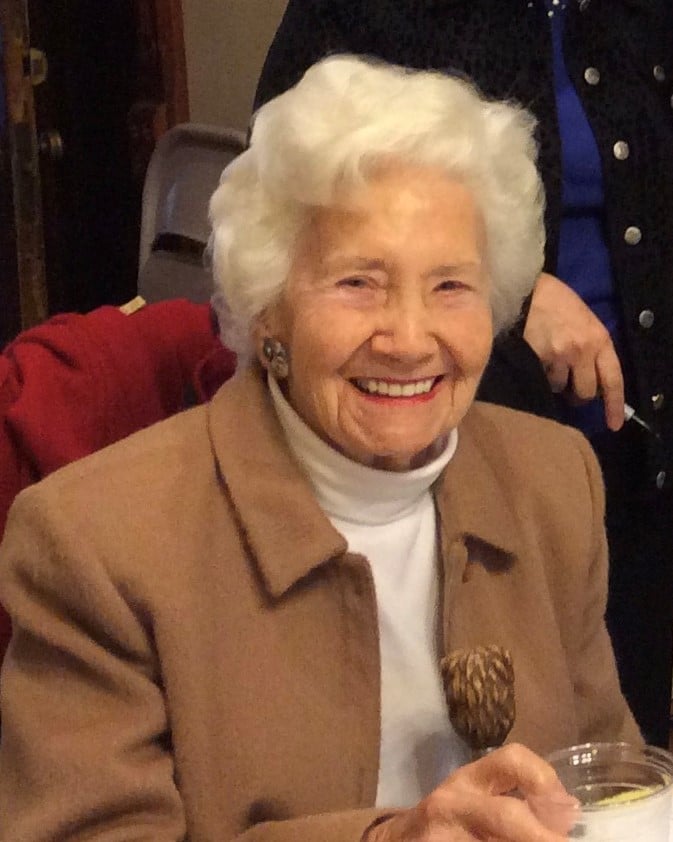 Mary Lou Nelson Penny died to this earth and entered Heaven to see her Lord and God in all His glory on January 9,2022.   She was born July 31, 1923 at 1046 Kentucky Street, Lawrence, Kansas to Mary Estelle Nelson and Dr. William Oliver Nelson.  She was the 4th and last child born into the Nelson family.  She attended Quincy, Cordley, and Pinckney grade schools.  Pinckney was where she first encountered her future husband, Junius M. Penny.  Her father, being a physician, led to many family members living with them at different times while her mother nursed them through illness or old age.  Mary Lou loved growing up in Lawrence and spending summers in Green Mountain Falls, Colorado.

After graduating from Liberty Memorial High School, she attended KU for two years studying in the first Occupational Therapy program offered.  She and Jun Penny eloped their sophomore year to marry in Hutchinson where her brother, Jim Nelson lived, on February 6, 1943.   It was wartime and Jun (who had enrolled in the Navy Air Corps) was later drafted into the Army because his marriage made him ineligible for the Air Corps.  He was trained as a radiation tech, and Mary Lou followed him to each training site thus ending her college endeavors.  Before deployment, they had a son and she was pregnant with their second child.  When Jun returned from India, he finished his last 2 years at KU earning a degree in civil engineering.  Black & Veatch hired Jun to be resident engineer in Caruthersville, Missouri where the young family moved.  His father, M.N. Penny, recruited him to operate the Penny’s Ready Mixed Concrete business in Emporia which Jun’s brother, Charlie, had started.  By this time, there were 4 little Penny’s with one more to come.  Mary Lou was a wonderful homemaker and partner to Jun.  They were a team, reflecting a love of people and an open, welcoming home.  They never seemed to meet a stranger.  Mary Lou, with rare exception, was available for her children when they came home from school providing time for talking about the day’s activities or their thoughts.

Mary Lou was active as a Sunday school teacher (wondering later what she had taught, not knowing the Lord), in the Women’s Garden Club, and Research Study club as her children got older.  She later served on the boards of the Emporia Public Library and the City Parks and Recreation.  If she learned of neighbors or friends having trouble, whether financial, marital, or emotional, she tried to help.  She took food to those who were ill, and helped several elderly women.  She came to know many of the foreign students (from Ethiopia, India, Greece, Thailand, & Taiwan) attending Emporia State, inviting them into their home for meals and visits.  She and Jun were the unofficial sponsors for a group of Hawaiian students at Emporia State in the late 50’s, and remained in touch with some up until now.  There were many women who were close friends to Mary Lou.  Carmen and Oscar Hernandez, who had escaped Castro’s Cuba losing all they owned except their lives and their son in the 1960’s, became dear friends soon after arriving in Emporia.  Carmen remained close until her death in 2015.  Neither age nor culture proved a barrier in Mary Lou’s friendships and outreach.  Close to becoming empty-nesters, the Pennys embraced two children of friends from Columbia, South America, the Villarreals, to live with them as family: Johnnie stayed for a couple of years through 2 years of college and Leslie at age 11 stayed just a couple of months, but long enough to call Mary Lou “Mi Penny”.  When her children left home, Mary Lou took classes at Emporia State, especially enjoying The Great Plains Semester taught by Jim Hoy and others.

The Pennys attended church as a family each week: Mary Lou and Jun were active on church committees.   However, it was only in the early 1970’s that Mary Lou & Jun accepted Jesus Christ as Savior through a gradual process of realizing His claim on their lives for what He had done personally for them at the cross, that their “good works” could not gain them a place in Heaven nor cancel out their sin.  It was only then that Mary Lou learned to rely on the Holy Spirit’s power to really help those in need for whom she had previously felt exhausting compassion.  A trip to Ecuador for Jun to determine the feasibility of establishing a hydroelectric plant in the jungle for Gospel Missionary Union involved knowing missionaries Frank and Marie Drown: it proved life-changing in regard to the Pennys’ understanding of the Christian faith.  At one point, four of the Penny’s children were on different continents, learning the language, holding jobs as engineer, nurse, teacher or short term missionary in order to share Christ’s love.  Mary Lou (and Jun when he could break away from the plant) traveled yearly to encourage them in their endeavors.  Their visits, such as in the Arab world where family & tribe trump individualism, brought a new dimension and respect for the Christian faith their son or daughter sought to live out.

Mary Lou and Jun loved their grandchildren, making time to go see them or have them visit, whether in Emporia, Colorado, or eventually back in Lawrence.  When Jun developed Parkinson’s disease, she took everything in stride taking on his healthcare needs, continuing to be a team and welcoming family and friends at home or by taking them out to eat.  The challenges that came with his declining health and then her own health never caused her to falter.  When the going got tough, she always rose to the occasion, giving thanks to God for His many blessings. She came out each morning with a big smile and “Good morning!  How did you sleep?”  Each night she went to bed perhaps reading a good book on her Kindle, but then always the Bible before sleep.

In her later years, she was encouraged to put that sharp mind to work by writing her memoirs about Colorado and growing up.  Two Colorado friends and the Ute Pass Historical Society have published some of these detailed memoirs.  When she asked, “Where are my yellow pages?” she wasn’t looking for a business telephone book, it was her legal pad with tattered pages of phone numbers for her myriad family and friends.  She eventually entered multiple 100’s of contacts into an excel spreadsheet programmed to be an address book, amazed to see it alphabetize names with one click!  She would settle in a comfortable chair and spend hours calling to stay in touch with family and friends.  If she awoke before midnight in Kansas, it wasn’t surprising to find her on the telephone with family or friend in California or Hawaii.

She never stopped thinking about or praying for others.  She loved to learn or talk about the Bible.  She engaged with what was happening in the world news, including writing letters to the editor.  She was never cowed by political correctness, public opinion, or current socially accepted behavior, but spoke out boldly for what she knew or believed to be right.  This strength and clarity of thought occasionally surprised even her family.  She was a blessing to many, a true friend and mother to many younger people.  Her appetite for knowing and loving people and learning was never satiated.  What a great reunion she is now having in heaven where there is joy unimagined in God’s glorious and loving presence!

There will be a visitation with family at Warren-McElwain Mortuary on Friday, January 14th from 5 to 7 PM including a sharing time, a luncheon at Lawrence Bible Fellowship at noon Saturday, January 15th followed by the funeral service at 2 PM with graveside burial to follow.