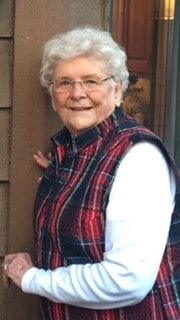 God broke the mold when Marge was born on August 17, 1930, in Paola, KS, the daughter of Bernard and Margaret (Schroeder) Stiles.

After moving to Baldwin, Marge graduated from BHS in 1948 and stayed close to many friends and classmates.

She married Thomas “Tom” C. Hitchcock on September 27, 1948, in Baldwin City, who among his many affections for her frequently said she was “handier than a pocket on a shirt.”

Marge was a beloved mother, homemaker and co-owner of her husband’s fourth generation pharmacy, Hitchcock Drug Store. Marge was the first woman elected to the Baldwin City Council where she served two full terms. She also was a successful realtor in the Baldwin market in the 1980s.

Marge and Tom moved to Lawrence in 1986.  Marge worked at King Pharmacy until her retirement.

Through her active retirement, Marge enjoyed golf, quilting, playing bridge and was a KU season ticket holder. Marge never missed a KU basketball game and chants of “Come on Jayhawks!” could frequently be heard during any game.

Marge was predeceased by her husband and four siblings.

There are no services scheduled at this time

Memorial contributions may be made in Marge’s name to Warren-McElwain Mortuary to be designated at a later date.