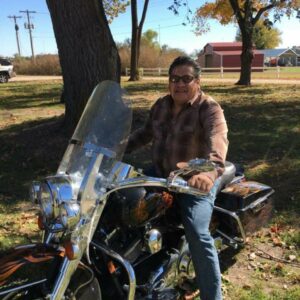 A Mass of Christian Burial for Felipe Jesus “Jesse” Martin del Campo, Jr., 56, Lawrence, KS, will be held at 10 a.m. Friday, July 21, 2017 at St. John the Evangelist Catholic Church in Lawrence. Burial will follow in the Mt. Calvary Catholic Cemetery. Jesse passed away Sunday, July 16, 2017 after a motorcycle accident.

He was a member of St. John the Evangelist Catholic Church.

Memorial contributions may be made in his name to the Jesse del Campo Memorial Fund and may be sent in care of Warren-McElwain Mortuary.