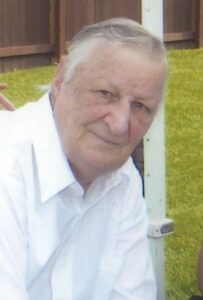 Family graveside for Howard Esco Sloan, 86, Lawrence, will be held privately at Memorial Park Cemetery. A celebration of Howard’s life will be held from 5 p.m. – 7 p.m., Saturday, March 7, 2020 at the Fraternal Order of Eagles in Lawrence, KS. Howard passed away Thursday, February 27, 2020, at Legend Healthcare in Tonganoxie, KS.

He served his country in the United States Army during the Korean War.

He was the owner and contractor for Sloan Drywall.

The family suggests memorials in his name to L.I.N.K and may be sent in care of the Warren-McElwain Mortuary, 120 W. 13th Street, Lawrence, KS 66044.