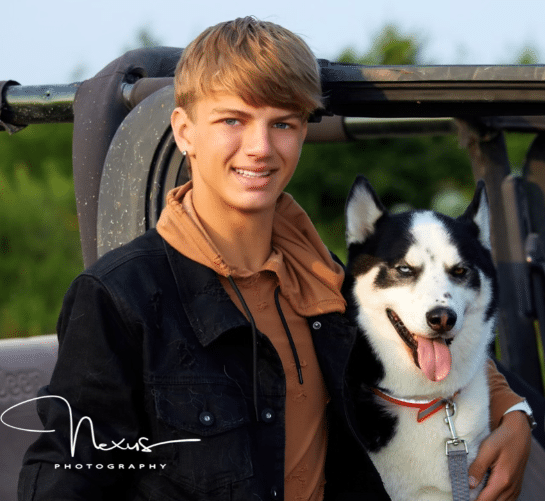 Erik Joseph Acheson, age 18, of Mayetta, KS, passed away on July 29, 2021 in Springfield, MO. Funeral services will be held at 1:00 p.m., on Friday, August 6, 2021, at the First United Methodist Church in downtown Lawrence. Burial will follow at Oak Hill Cemetery in Lawrence. Visitation will be held from 6- 8 p.m. on Thursday, August 5, 2021at Warren-McElwain Mortuary in Lawrence.

Erik was born in Topeka, KS to Howard “Rick” Richard and Gayle (Newman) Acheson on February 7, 2003. He attended Perry-Lecompton schools until moving to Mayetta and attending Royal Valley High School his junior and senior years with plans to attend tech school in Emporia in the fall.

His passions included being an uncle, a drummer, caring for all types of animals, and even tried rescuing many. He was always looking for a thrill to feel alive. Erik was a natural athlete who enjoyed playing baseball, football, basketball, snow skiing, and anything that involved the water. His world was a jungle gym performing flips and tricks off anything he could.

With a heart of gold, he never hesitated to help or defend anyone in need. His goofy personality and quick wit allowed him to make people laugh and feel included in any situation. The most important thing to him was his family – especially his best friend and brother, Alec.

He was preceded in death by his father, and grandparents, Howard and Ruth Marie Acheson.

Memorial contributions may be made in Erik’s name to Pawsitive Tails and may be sent in care of Warren-McElwain Mortuary, 120 W. 13th Street, Lawrence, KS 66044.