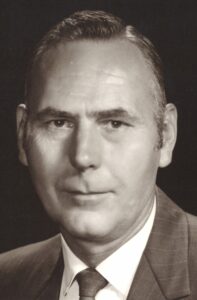 After a long, accomplished, and well-lived life Don Westheffer – 95 – passed away in his home surrounded by his loving family on March 14, 2018.

Don was born to his parents, Don and Phebe (Bigsby) Westheffer in Eudora, Kansas. Don attended Farmland #71 School which was located on an acre of land donated by his grandparents. It was at this school that his mother, Phebe Bigsby, first taught and eventually met and married Don’s father, Don Westheffer. He would often tell stories about having to go early to the schoolhouse and bring in wood to start the woodstove in the school. Graduating from Eudora High School, he then was involved in farming in the abundant Kaw Valley for over 75 years. At the 1947 New Year’s Eve dance at the Community Building in Lawrence he met the love of his life, Wanda Rush. They were married six months later and enjoyed 69 years together until she went home to be with the Lord in 2016. He had a long and successful career where in 1960 he founded and was President of Westheffer Company, Inc. While building Westheffer Company, Inc alongside his wife – Wanda – and his son – Murl – they designed, distributed, and developed spraying systems for the lawn care, industrial, and agricultural industries. Under his tenure at Westheffer Company, they designed and built what became the largest lawn care systems/sprayer truck build in the United States and Canada.

Serving one term as the Director of the National Fertilizer Solutions Association (NFSA), he was a member of that organization for many years and was also a member of the Professional Lawn Care Association of America (PLACAA) and the Kansas Fertilizer and Chemical Association (KFCA). In addition, he was a lifelong member of the United Methodist Church. A member of the Missouri and Associated Rivers Coalition (MOARC) since 1952, it was shortly after the traumatic event of the 1951 flood that Don along with George Faler and Carl Mibeck traveled to Washington DC to elicit substantive solutions to the flooding issues of this area that eventually evolved to include the development of the reservoir system for flood control emanating in the creation of Clinton Lake and Perry Lake.

A very special man with a bright, sharp, inventive mind, he was creative and talented in many areas. Always a steward of the land, he was an avid gardener, growing vegetables in the fertile sandy loam of the Kaw Valley and he especially took great pleasure cultivating many varieties of hot peppers and eating fresh sweet peas off the vine in the springtime. He shared his passion for gardening with all of his grandchildren teaching them “to reap you must first sow”. The value of hard work was instilled early and often as an extremely important virtue. He enjoyed woodworking and created many handcrafted pieces that he shared with family and friends. Spending time traveling with his beloved Wanda was another passion and led them to various parts of the world as he was always curious to learn about new places and meet new people. One of his greatest passions was flying and when he got his pilot license in the late 1960’s, he purchased a Cherokee Piper 180 with the call sign November5112Lima and it was in this plane that he soared above the world with a freedom and lightness that was unsurpassed. His family now envisions him free of pain and physical limitations “slipping the surly bonds of earth… and putting out his hand to touch the face of God”.

He was preceded in death by his parents, his wife, Wanda, and his son, Gary Westheffer.

A tremendous debt of gratitude to Dr. Hatton and Peggy – Dr. Hatton’s nurse – for the wonderful care provided to Don and Wanda. Thanks also to the Douglas County Visiting Nurses Association and specifically nurses Ginger Hayes and Melissa Transue that tended to Don’s final needs. Sincere, heartfelt, and deepest appreciation for his caretaker, Mary Beth Nieder, whom without her help Don would not have been able to achieve his desire to live out his last years in his own home.

Memorial contributions may be made to the St. Louis Shriners Hospital for Children and may be sent in care of Warren-McElwain Mortuary, 120 W. 13th Street, Lawrence, KS 66044.

Placing a high regard for friendship, fellowship, social camaraderie, and believing in a spirit of fun, Don would invite all to raise a glass to toast a full life, a swift ascent to heaven, and above all to celebrate life – every single minute!!